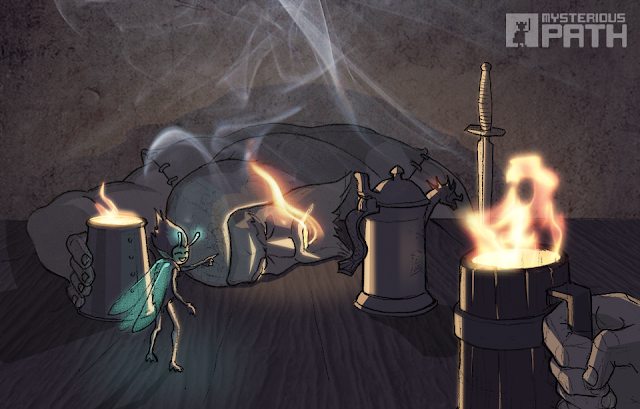 Originally a dwarvern liquid explosive used in mining operations, Dragon Brew has become a popular refreshment for Dungeoneers. No one really knows who first discovered the concoctions full-bodied flavour, but the cry "Make mine a flagon of Dragon!" is now common in taverns across the kingdom.

This extremely volatile liquid will ignite when agitated.  This property has allowed the drink to be gainfully employed in the construction of incendiary weapons and, of course, for starting the legendary dwarven barbeques.

As any safety-conscious dwarf will tell you, hairy-faces and flaming drinks are not a happy combination. This fact has not gone unnoticed and, traditionally, Dragon Brew is consumed through a 'brew flute'. Often mistaken for some sort of wind instrument, the flute effectively keeps the beverage away from combustible facial hair.

A popular drinking game, involving taking a swig of Brew and jumping up and down on the spot, has resulted in many fatalities and the destruction of several drinking establishments. As a result some publicans have refused to stock the beverage, opting instead for the non-flammable rival brand Dungeon Dew.