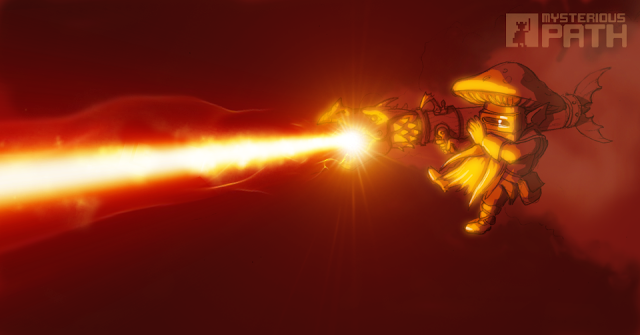 Infernium is believed to be fossilized dragon fire, an extremely rare substance excavated from a time when the majestic beasts reigned supreme. Even tiny grains of infernium contain immense amounts of stored energy. Gnomes have learned to exploit this latent energy and have utilized it in a range of military applications. Infernium Mortars are roughly the size of a human wand and could, with some slight modification, be gainfully employed by dungeoneers.


Other potential uses of infernium:

1) Castle central heating. A small infernium stone, releasing its energy in a less explosive fashion, would be enough to heat even the draftiest castle thoughout the season of Fatal Frost. Outdoor swimming for everyone!

3) Reach for the stars. What secrets lay undiscovered on the Ghost Cities of the moons? An infernium propulsion system could be the technology that heralds a new era in cosmic exploration. After successful tests with 'willing' faeries the first manned mission is now in the planning stages. Watch this space.

4) Weapons of mass annihilation. Disturbingly, it is believed that a group of extremist terror gnomes have amassed enough weapons grade infernium to create an explosive device of apocalyptic proportions. Their motives and demands currently remain a mystery. May the Boss God watch over us.

Gnomes are not related to the dwarf, but in fact a type of shroomanoid (an anthropomorphic sentient fungi)