The Problem With Gamebooks Trilogy - Part 5

In the previous post in this series I suggested a potential solution to some of the relational issues between reader and character in interactive fiction.  But fixing characters is only half a solution. The other half requires us to address another gamebook problem area, plot.

I will avoid talking about plot in terms of creative writing, there are far better sources for that. Rather I will focus on how the gamebook's strict branching tree format needs to evolve to facilitate better interactive storytelling.

Gamebooks plots are a string of set-pieces.

Simple gamebook plots are often a sequence of interconnected set-pieces. The player moves from scene to scene, the designers assuming that ‘kill the wizard’  or ‘progress through the map’ is a robust enough premise to glue the narrative together.

Gamebook ‘causality’ is often confined to a single choice or small scene. There is no sense that your actions in one scene have any causal relationship with subsequent scenes and events.

The limitations of the print medium have made far-reaching causal effects in gamebooks impractical. To do ‘causal’ properly a gamebook would need store a player’s previous choices and apply them to the following scenes. With the existing format this would clearly be an onerous task for both the player (who would have to record or remember his previous choices) and for the designer (who would need to write a multitude of scene variations to accommodate the players previous choices). But without tying scenes together we don't have plot, just a sequence of incidents. 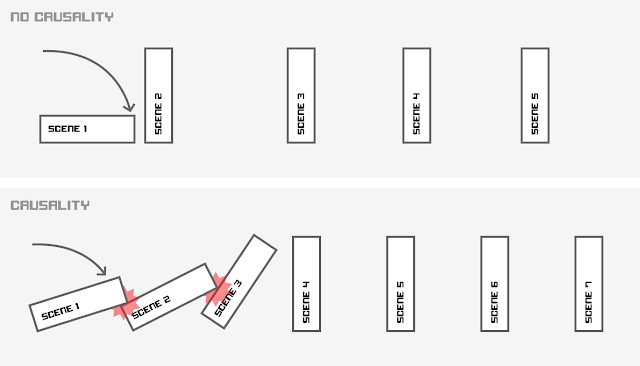 Causality is required to make a series of scenes a plot.

But this is the internet age, the constraints of analog gamebooks no longer concern us. Digital gamebooks can save our progress, remember our choices and record variables beyond the usual stamina and luck. However, the problem remains that although a gamebook can remember, it would still be left to the designer to generate the broad range of narrative possibilities. Although we are no longer restricted by page or word counts, it's not a practical solution, it just makes the writing of a gamebook an increasingly colossal task.

With a simple game engine we could let the processor do some of the work for us.

Current gamebooks, with their print origins, are in a solid narrative state. That is, all the text exists in pre-written chunks. What is written is set in stone, it's solid. This requires the game designer to anticipate and pre-generate all the content.


Gamebooks in a liquid narrative state, a possibility for digital gamebooks, would allow the narrative to be generated from a set of smaller story fragments. Gamebooks are already broken into paragraphs - why not break them down further? By increasing the granularity of our story fragments, reducing them to sentences and words, the gamebook could be a more personalised experience and enable the potential to engineer causal links for each play through.

A liquid narrative would not store scenes in a rigid finished form, but assemble them based on a simple set of rules (I'm not talking about a complex IF engine here!) Although the designer would still need to consider the permutations resulting from a players choice history, he would not have to construct complete paragraphs, the engine would do this bit.

So our player's prior choices have been recorded, variables and flags are stored. The data is then parsed and a scene is assembled by the story engine. But how does this engine decide which fragments to use and in what order?

Well, I'm not quite sure yet... but here are some initial thoughts:

1. Physical fragments
These are used to describe the physical setting, characters and objects.

2. Emotional fragments
These are used to manage rising/falling tension. To control the push and pull between hope and fear (see Robin D Laws Hamlet's Hit Points).

3. Relational fragments
These are used to reflect your previous interactions with NPCs.

4. Thematic fragments
These are used to present alternative viewpoints to the one being expressed by the player (though their choices) to create a tension or uncertainty.

This all needs much more cooking! 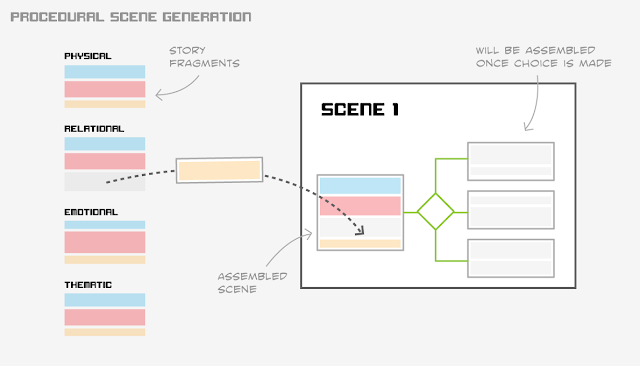 Physical, relational, emotional and thematic fragments come together to form a completed description.


Writing a story in this object orientated way will be challenge. Can these fragments flow seamlessly together so they that they are a pleasure to read? How will you track all the permutations and sense check them? Methinks some authoring tools will be required.

To clarify, I'm not advocating dumping the branching tree structure at this stage, just enhancing it. I believe gamebooks are a progressive, essentially linear, experience and controlling the core story flow should remain in the hands of the author, to let him deliver his message intact. What liquid narrative allows is: less binary outcomes to choices, the ability to have far reaching consequences to decisions and the ability to engineer causal links between separated scenes.

++UPDATE++ Both Twine and Inkle provide the functionality to create the concepts described in this post. The question now is how do we use this power to create more engaging gamebook experiences?


Next some thoughts on minimizing the harm interaction has on the suspension of disbelief...

The Weapon Master has a penchant for exotic melee weapons and small furry mammals.