The problem of anonymous main characters

The anonymous/generic approach supposes that by avoiding protagonist characterisation the reader is more able to transpose themselves into the shoes of the hero, and therefore be more deeply connected to the experience. (This identity vacuum is a technique utilised in 1st first person shooters, and a concept I was initially flirting with for Mysterious Path)

In addition, if the events in the story are happening to YOU, it is a reasonable assumption that you'll be interested in the outcome. However, an anonymous main character can limit dramatic scope in a number of ways.

1. Unable to interact with NPCs in meaningful/sophisticated ways (What do they represent?)

2. Can't be woven into fabric of story/world (Why are they here?)

3. Are devoid of genuine motivations (Why would they do this?)

Pixars 22 rules for great story states: Give your characters opinions. Passive/malleable might seem likable to you as you write, but it’s poison to the audience. This belief is why some authors have given their characters an identity.


The problem of main characters with an identity

Instilling your lead character with a heap of personality, whilst being a potential solution for the flaws of anonymity, is not without complications.

In Telltale Game’s Walking Dead I took on the role of Lee, the nice guy with a troubled past. I could readily put myself in Lee's shoes when facing the games dramatic/moral predicaments, but when Lee acted on my decisions something felt wrong. His reactions were consistent with the way Lee would react, but not the way I would react. The promise, YOU are the hero, was was broken.

It's possible this distancing effect was felt more profoundly because of the Walking Dead's audio-visual production.  I knew how the Lee looked, moved, sounded and (most jarringly) felt. There was no room for me to participate in bringing him to life. Maybe less is more when developing lead characters, but this puts us on the road back to creating anonymous characters (see above!).

How much personality should gamebook characters have?

To break this circular argument perhaps what's required is a better understanding of the forces at work on our audiences relationship with the media characters we create. Maybe some theory (PDF) and some experimentation will light the way.

Or perhaps there's a third option to investigate.


You are NOT the hero

So what exactly am I trying to fix here:

1: I want my hero to be three dimensional (in literary terms) and expect him to behave consistently with his encoded identity.

2: I also want to be honest with my audience about the level of control they have over the hero's actions.

The solution: You are NOT the hero. 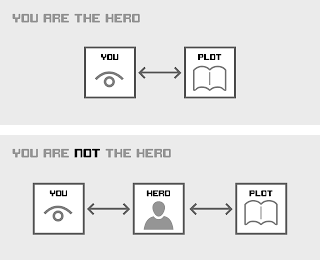 Well, you are an adviser, commander or other influential force acting on the character. This approach allows the reader to make the important decisions but releases the lead character to fulfill the dramatic potential of the choice (doing it in his own indomitable way).

Rather than the reader being in direct control of driving the plot forward they now guide the hero, who in turn advances the plot. This is a more genuine reflection of the level of influence the reader is able exert over the narrative flow in a gamebook. We are no longer promising true agency (and failing to deliver it). Being honest with our audience is a much better way to maintain engagement.

The other benefit of this approach is that the story's protagonist, now free from the readers direct control, can freely express their own thoughts and opinions. He can react to situations in a way that is true to his character, despite being directed by a higher authority (that's YOU). Whilst fearful of breaking the gamebook commandment - Thou shalt be the hero - I am expecting that our audience will still be able to identify and root for the main character. After all. we are able to empathise with the protagonist in traditional story forms so why should gamebooks be any different?

Not all scenarios will suit this model but Mysterious Path's comic book format lends itself to the 'NOT the hero' approach. The idea of reader/character separation is something I've thought about before when addressing how a comics third person view might affect a reader's sense of identification with the protagonist. If the audience takes on the duty of the hero's spirit guide the comic book format's third person view makes perfect sense. They are watching over events not experiencing them first hand.

By separating the reader and the protagonist we have created a new relationship. A realtionship between audience and our digital hero. Like Tron and his User. Having an association like this at the heart of a gamebook experience could be a very powerful instrument.

Even rudimentary interactions with digital pets in games like Little Computer People (1985), Tamagotchi (1996) and Moshi Monster (2008) are enough to show how strong emotional attachments can be fostered with their 'owners'. These digital pets communicate directly with the audience, breaking the fourth wall. Is this something that could work in a gamebook? This CYOA video paraody shows how you might leverage the technique to create a strong emotional bond with a character whilst adhering to the classic format. As you play through you'll notice the affinity you develop with the narrator becomes more affecting than the story he's telling.

Digital gamebooks could go a step further. Electronic formats would allow creators to forge less binary relationships with their story's characters. Every choice made, that affects the character's mental state, can be recorded with a number of variables (an unfeasible task with a pencil and paper). This relational history could then determine the characters willingness to comply with commands or have a pivotal affect on the character's emotional development or have some other cumulative affect which could alter the flow of the story (There's a whole other blog post here!)

Our hero loses faith in the reader after a series of poor decisions.

You might think breaking the 'YOU are the hero' rule and elaborating on the digital pets concept is a weak foundation for 'fixing' gamebooks. You may be right, but my suggestion provides a framework that makes sense of audience participation, allows protagonist chracterisation and opens up an unusual way to interface with interactive stories. It might just work... for me at least!


Now about those gamebook plots...

Gone for an Erol Otus meets Akira Himekawa look for the hero. Based character proportions on 28mm tabletop miniatures - with over sized head, hands & feet.
NOTE: This was posted when I was into the Identity Vacuum thing.