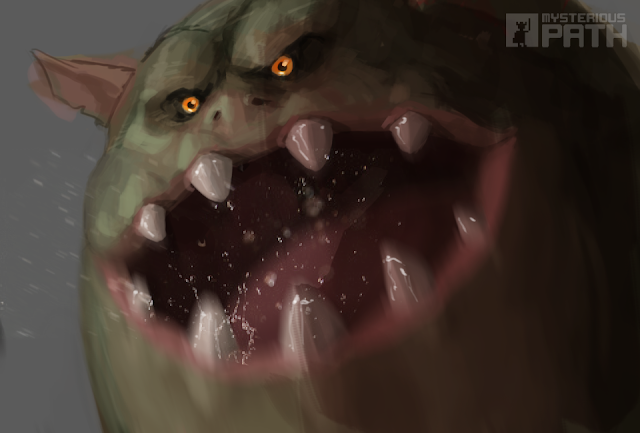 Greatspear's Bestiary of Brutal Bipeds (2nd Edition) offers a few sage pieces of advice for the low-level dungeoneer confronting an ogre, he states:

A frontal assault is tantamount to suicide

Fighting an ogre is not an option for greenhorn adventurers, and should be left to the seasoned combatant or the magically well endowed. It’s gnarled and stone-like skin is almost impenetrable to cutting weapons. Indeed, it's hide can be fashioned into a natty armour that's tougher than plate but flexible like leather (although the potent, lingering smell means this is only an option for the nasally challenged dungeoneer).

Water is your ally

Ogre's sink. As a result Ogre's have acute hydrophobia, and this can be used to the advantage of the wily dungeoneer. Take up a vantage point in the nearest river, lake, pond or moderately sized puddle.

Gravity is your ally

The ogre's top heavy construction is another exploitable weakness. If upended, an ogre can get 'stuck' headside-down, much like a turtle stranded on it's back. Of course, destabilizing the massive beast is easier said than done. Tip: lubricate the combat arena with a smidgin of death jelly or (war snail) mucus.

If all else fails...

The kingdoms top nutritionists/druids/dietitians hypothesize that there are two factors that contribute to the ogre's perpetual hunger: 1) It doesn't chew it's food. 2) It doesn't digest its food properly.

This is great news for the dungeoneer. A well timed leap could see you quickly past the jaws and 'safely' into belly of the beast. The stomach, in comparison to the head, is relatively small and with new food arriving all the time the inevitable happens. A bowl movement. Once 'released' the adventurer can continue on his quest with only minor burns from digestive acids (It's advised an excreted survivor treats themselves to a weekend at an elven spa to fully remove any lingering odour)

I'd love to hear your ideas!